home / News & Media / Dhaman: Arab countries have attracted over 14,443 foreign projects with a total capex of $1.3 trillion in the course of 19 years

Dhaman: Arab countries have attracted over 14,443 foreign projects with a total capex of $1.3 trillion in the course of 19 years

The Arab Investment & Export Credit Guarantee Corporation (Dhaman) revealed an improvement in the setting of Arab countries in the majority of international indicators pertinent to the investment climate during 2021, which positively reflected on foreign direct investment projects in the region during 2021, which rose by 37% in number to hit 14,443 projects between 2003-2021 with an estimated total capex of $1.3 trillion. The projects, which have created nearly two million jobs, were mainly in the UAE by 41% of the total number of projects and Egypt by 19% of the capex.

The corporation said in its 37th annual report on the investment climate in Arab countries for 2022, which was launched at its headquarters in Kuwait today, that it had monitored around 100 compound indexes and sub-indices issued by more than 20 international agencies. The have revealed a relative improvement in the setting of Arab countries during 2021 in economic performance indicators, stability in sovereign and country risk rating indexes and disparity in indicators of production elements, against a drop in legislative and regulatory environment indicators.

The corporation’s Director-General Mr. Abdullah Ahmad Al-Sabeeh said in the report that the final result of Arab settings in international indicators have positively reflected on foreign direct investments into the region amid expectations of continuing growth in 2022, especially following a rise in the number of foreign projects by 15% and a hike in capex by 86% to hit $21 billion during the first four months of 2022, compared with the same period of 2021, especially if the reflections of the Russian-Ukrainian war on the region are eased out. 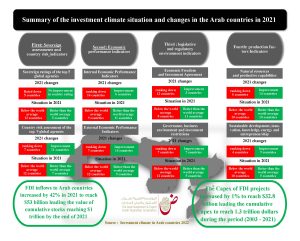