The Arab Investment & Export Credit Guarantee Corporation (Dhaman) revealed the recovery of Arab merchandise trade during 2021, buoyed by the improvement of the epidemiological situation in the region, return of economic activities, easing of movements restrictions on goods and rise in the value of Arab exports, especially oil, as well as average oil price surge up to $67.3 a barrel during the same year.

The geographical concentration continued, with five Arab countries contributing over 77% of the region’s total exports, while five countries constituted around 72% of overall merchandise imports. Only two countries: the UAE and Saudi Arabia, had 56.2% of Arab merchandise trade for the same year. 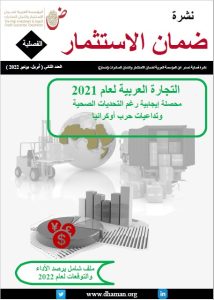 However, Arab goods and services trade is likely to keep growing by 31.6% to hit $3 trillion during 2022, based on International Monetary Fund (IMF) estimates, buoyed by the expected record growth of exports, particularly fuel exports, coupled with the anticipated growth of world trade during the same year, in spite of expectations of continued impacts on global supply chains due to the Russian-Ukrainian war, China-Taiwan escalation and other consequences, compared with successive hikes in the prices of basic commodities, particularly energy and foodstuff, according to the bulletin.

In this regard, “Dhaman” called for continued moves at the countries and region’s levels to diversify exports and mitigating their geographic concentration on a limited number of exporting countries and markets. It also underlined that it would maintain its policy of stepping up efforts to boost the Arab region’s merchandise exports, and strategic and capital goods imports, by offering various insurance services to exporters from the region and financiers of international trade operations in Arab countries with a view to protecting them from potential trade and political risks against their business.