The Arab Investment & Export Credit Guarantee Corporation (Dhaman) revealed that the Arab gross domestic product (GDP) is expected to grow by 5.4% to exceed $3.4 trillion during 2022, according to the International Monetary Fund’s (IMF) estimates in October 2022, in spite of the fall of global economic growth to 3.2%. It noted that the Arab economy is expected to maintain its positive growth during 2023, but at a slower pace to 3.9% to reach around $3.5 trillion, in light of the continued Russian-Ukrainian war and an expected drop in global oil prices by roughly 13% during 2023.

In a press release issued to announce the issuance of its fourth quarterly bulletin for 2022, the corporation said Arab economy performance improvement during 2022 is due to thriving Arab trade in goods and services and a rise of 41.4% in global oil prices, coinciding with the increase in oil production by 11.5% in  the Arab oil countries in addition to the growth of non-oil sectors in some Arab countries and  the continued industrial production expansion, beside the growth of total investment by 12.5% in the Arab region during the same year.

The corporation added in the editorial of its bulletin that most of the Arab economic performance indicators improved during 2022 compared to 2021, as the GDP per capita in Arab countries rose by 16.8% to reach $7,690 on average, with expectations to decline to $7,614 on average during 2023. Meanwhile, the average of GDP per capita in the purchasing power parity went up to roughly $17,061 during 2022, with expectations to keep rising to $18,020 during 2023. 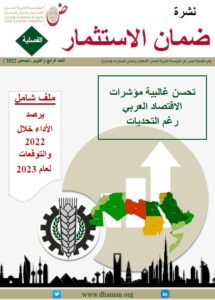 Improvement in other indicators comes as follows:

In this context, the corporation urges the member states to step up efforts and cooperation in view of finance, trade and investment in light of global economic slowness, the continued Russian-Ukrainian war, rising and volatile prices of goods, specifically food, and stringent financial conditions. It also reaffirmed that it would continue its role of backing trade and investment in the Arab region by providing its services of insurance against political and commercial risks with a view to maximizing the benefits of member states and the peoples of the region.