A Dhaman delegation, led by Director-General Abdullah Ahmed Al-Sabeeh, visited Egypt between March 15-17, 2022, where they toured the Ministry of International Cooperation at the invitation of Minister of Interior Cooperation Dr. Rania Al-Mashat, with the aim of discussing means of promoting cooperation and boosting insurance operations in Egypt. 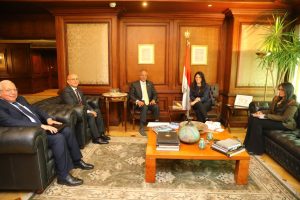 During the meetings, they mainly discussed ways and means of bolstering cooperation between the corporation and Egypt in the fields of investment, commerce and finance insurance, along with a workshop with government bodies concerned on the corporation’s activities and services in presence of both public and private sector’s representatives. They also tackled how to step up cooperation in research and consultation domains and exchange of information about the investment and business climate.

Al-Sabeeh added that Egypt has been a cofounder of the corporation since 1974, and contributes at least 2% of its capital. It is represented by its minister of international cooperation or by his assistant for Arab funds during the meetings of the corporation’s board of shareholders in April every year. Throughout its history, the corporation has signed memos of understanding and cooperation with a number of Egyptian bodies, the last of which was the General Authority for Investment and Free Zones (GAFI).

Al-Sabeeh noted that the corporation was established in cooperation with the Islamic Corporation for the Insurance of Investment and Export Credit (ICIEC) and Aman Union, which comprises 18 Arab and Islamic insurance bodies, including the Export Credit Guarantee Company of Egypt. The corporation also works with Egyptian agencies concerned with consulting, research and exchange of information on the corporation’s publications, mainly the investment climate report, bulletins and studies. It also partakes in a number of conferences and activities in Egypt.

The corporation provides credit insurance to Egyptian exports and capital and strategic imports against political and commercial risks, including importers’ bankruptcy, insolvency and default.

The director-general continued to say that the corporation seeks to help its member states, including Egypt, make use of its insurance operations and activities, adding that Egypt had benefitted from 5.3% of its overall accumulated operations between 1975 and 2021, at a value of $ 521 million’s worth of insurance for Egyptian exports, $ 1.9 billion’s worth of insurance for Egyptian imports, and Arab and foreign investments into Egypt. The corporation’s valid contracts in Egypt totaled $ 135 million, making up 10% of its overall contracts until the end of 2021.